Neutral Bay is a harbourside suburb on the Lower North Shore of Sydney, New South Wales, Australia. Neutral Bay is around 5 kilometres north of the Sydney central business district, in the local government area of North Sydney Council. Neutral Bay is one of those places that has every convenience you need. A bus trip takes you directly to the city or a ferry. The Warringah Freeway runs along the western border of Neutral Bay, providing links south to the Sydney CBD and north to Chatswood.

The main shopping district of Neutral Bay, known as Neutral Bay Junction, is along Military Road, which is the main road that runs through Neutral Bay, Cremorne and Mosman. It features many quality shops, restaurants and cafes.
Neutral Bay has many varied food stores (deli-style as well as two Woolworth supermarkets), various restaurants and cafes. There is a Post Office centrally located on Military Road and plenty of shopping opportunities to suit all styles. Several doctors, dentists and pharmacies service the area as well as podiatrists and optometrists. Banks also feature heavily in the area and paper deliveries are managed by one of two newsagents.

The suburb has a mixture of apartment buildings and free-standing homes all on well-kept tree-lined picturesque streets. 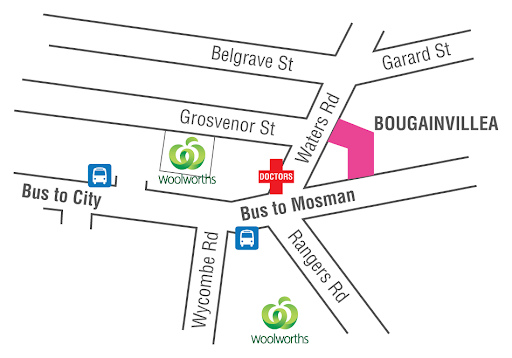 When my mother needed to move from Newcastle, I spent many months looking at more than 20 retirement facilities. Bougainvillea was unique from the first visit and my mother regularly said that coming to live there “was the best decision she ever made! The care and attention to detail has never been more apparent than in these strange pandemic days. Thank you and congratulations to all the staff who have made my mother’s stay so happy over these years.
Elizabeth – Daughter of a Resident
The difference that we perceive, is the Bougainvillea team don’t see it as just a job, but see themselves as professional enablers for people to live well. The warm community spirit is testament to their success in that. I can’t emphasise enough how significant the private retention of Bougainvillea is, along with the strata titles of the residents. It’s a case study for how to make retirement living work, and I do hope that the relevant authorities and legislators can watch and learn from Bougainvillea’s example. It’s a major triumph, proving beyond doubt that business success and compassionate ethical practices are not mutually exclusive.
Grant – Son of a Resident
I’ve been fortunate enough to live at Bougainvillea since 2015. It was the choice my husband and I made after inspecting and researching all the other retirement villages. I love being right in the heart of Neutral Bay, with easy access to shops and all essential services. The staff are very professional and have been especially kind and caring during COVID-19. I am very happy at Bougainvillea and feel very safe and part of a wonderful community.
Shirley
Coming to Bougainvillea was one of the best moves of my life, as I have been very happy in my new home. I had looked at quite a few retirement villages and clearly remember thinking when viewing Bougainvillea, ‘I could live here’. It just had a lovely, happy atmosphere and even before I moved here, the staff made me feel welcome. It is very well managed, and the support staff are excellent. A lot of us, as we get older, lose confidence, but the staff here go out of their way to get to know the residents, they help us with all sorts of little things that worry us. At a happy hour a week ago, one of my fellow residents said to me, ‘This would be the best retirement village in Australia’. I do believe she was right.
Gordon
After living in the same home for 38 years, the thought of moving was very daunting! However, the process was not nearly as confronting as I had imagined, because of the wonderful direction, help and patience given by the sales department at Bougainvillea. Then came the move into my new home, which again was seamless because of the help I received from the staff and the warm welcome given to me by the other residents at Bougainvillea. The location is wonderfully convenient for all things shopping and transport, I’m wondering why it took me so long to make the decision to move
Helen
It was a big move for mum after 60 years in the family home to relocate to Bougainvillea. Mum is settled and enjoying her new home. All the staff at Bougainvillea have been so helpful and always around to assist mum when she needs a hand. It’s a great place for our family to visit and have some time with mum. Bougainvillea has far exceeded our expectations.
Kerry – Daughter of a Resident. 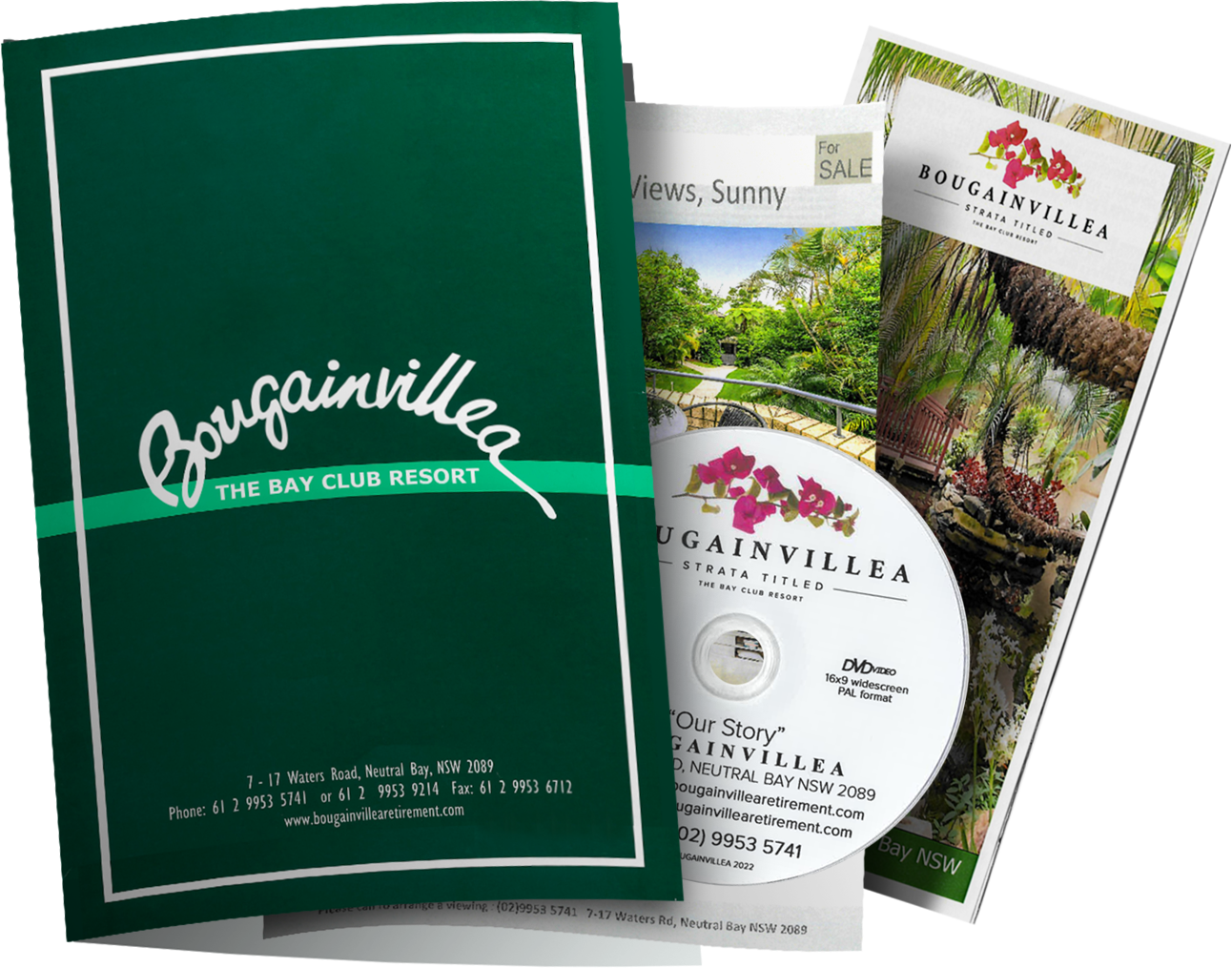 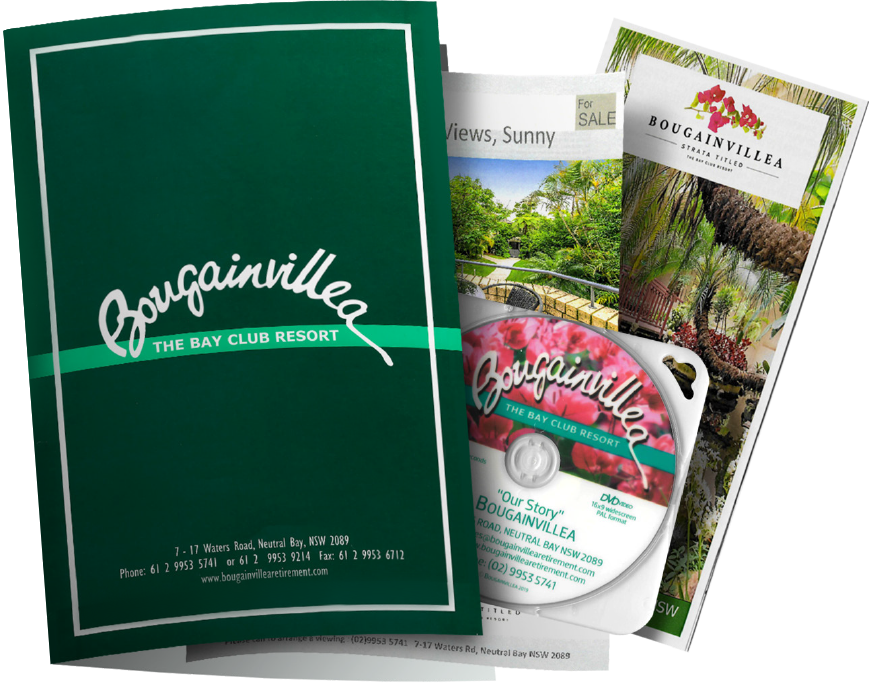 Serviced and independent living strata titled apartments in the heart of Neutral Bay.

to make an appointment